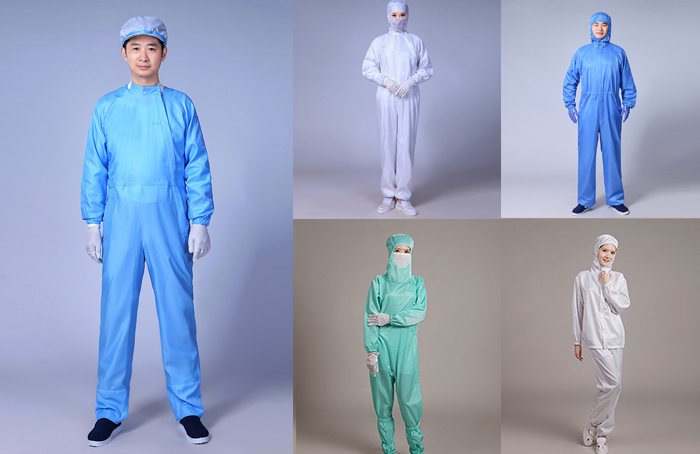 First of all, it is divided into 100, 1000 and 10000. The highest grade is 100. For example, electrostatic fabrics are divided into 0.25 grid, 0.5 grid and 0.5 stripes. Different fabrics correspond to different grades. The performance of antistatic clothing mainly depends on the conductive wires on clothing. The denser the conductive wires, the better the effect. It can also prevent dust and have good dust filtering function.

10,000-grade clothes, that is, stripes of 05, are worse than the mesh. They are generally used in coats, split suits, etc. They are suitable for electronic factories, food factories and so on. 1000-level 0.5 grid, the grid wire is more dense than the Striped electrostatic clothing, mostly used in electronic semiconductors, precision instruments, biopharmaceuticals and so on.

Class 100 is 0.25 grid, which is the cleaner clothes with higher grade on the market. It can be made into a single suit, which can better play a protective effect. It is suitable for aerospace, biopharmaceuticals, microelectronics and other industries with higher requirements.

May 27, 2018/0 Comments/by wootc
https://www.wootc.com/wp-content/uploads/2018/10/2018110609350477477.jpg 454 700 wootc http://www.wootc.com/wp-content/uploads/2018/10/logo.png wootc2018-05-27 15:57:382018-11-10 13:52:07Classification on Electrostatic Garments
China has become the processing base of electronic products, in the Pearl River Delta and Yangtze River Delta Regions, a large number of electronic enterprises have been established. At present, the vast majority of ESD control job in these enterprises doesn’t follow ESD 20.20 in accordance with American standards. The ESD control work in factories is nothing more than to purchase simple ESD supplies such as anti-static work clothes and wristbands, which is far from ESD 20.20 standard.
Name
ESD Testing/Electrostatic Discharge Testing
Reference Standard
EN61000-4-2
Corresponding National Standard
GB/T 17626.2

Many enterprises are often rejected because of ESD problems after thorough preparations, when they encounter on-site audits of foreign customers. The improvement of ESD technology level is the top priority of the whole electronic industry, and the promotion and popularization of ESD system standards is an arduous task.

NSI/ESD S20.20:2007 is an accreditation project officially launched by ESD Association of United States in 2000. The association is composed of manufacturers and users of electronic components. Its main members include IBM, MOTOROLA and other companies. OEM factories or suppliers of these companies must pass ESD S20.20 accreditation in order to obtain and maintain credentials as OEM and products suppliers. Therefore, it can be considered that ESD20.20 is a buyer’s certification standard. For manufacturers of chips, electronic components, power supplies and plug converters, and displays, ESD20.20 is considered a compulsory certification in order to become a well-known brand supplier.

ESD certification is based on ANSI/ESD S20.20, which is to certify the ESD system of enterprises (including documents, personnel and protective facilities, etc.). ESD standard is a specific requirement for ESD protection and control system based on ISO 9001. The standards clearly stipulate the establishment of ESD system, EPA, packaging of sensitive devices, processing of production, personnel training and assessment, establishment and inspection of internal audit system, and detection methods.

Including electronics, electrics, IT and communications, etc.
1. Enterprises requiring high static electricity protection, such as those producing wafers and magnetic heads.
2. Subordinate enterprises or suppliers of well-known multinational corporations, such as IBM, Intel etc.
3. Well-known EMS enterprises of OEM and ODM.

The test is divided into:
Contact test refers to the direct contact test for the exposed metal part of the object to be tested.
Air test refers to the direct pressure of an electrostatic spray gun on the object to be tested where the object is not in direct contact with the metal (e.g. separated by a layer of plastic).
In the standard, air discharge was suggested to be “as close as possible”, but how close is that? Therefore, manufacturer A  may follow 1mm, and manufacturer B may adopt 10mm, while manufacturer C uses 3mm, which will cause inconsistence by following the air discharge specification.

Electrostatic discharge (ESD) can be divided into three types: Machinery ESD model, Furniture ESD model and Personnel ESD model. A brief explanation is as follows:
Machinery electrostatic discharge may occur in the automated control process, because of the friction between insulated metal parts and insulators in the automated machine, or the static electricity generated by the friction of insulating liquid or high-voltage gas, when the energy accumulates to a certain extent, it discharges nearby.
Furniture electrostatic discharge usually occurs when metal furniture rubs against insulating objects, such as pulling furniture on carpets or plastic floors, or when people stand up from chairs, static electricity is generated by friction.
Personnel electrostatic discharge is static electricity generated by human action friction, such as when we walk on the carpet wearing rubber shoes, the carpet carries positive charge and  rubber shoelaces carry negative charge because of friction. Now, the sole of human foot will be induced and positively charged, while the upper body will be negatively charged. If we touch semiconductor electronic components by hand at that time, the components will be damaged.
May 24, 2012/0 Comments/by wootc
https://www.wootc.com/wp-content/uploads/2012/05/esd-test.png 365 500 wootc http://www.wootc.com/wp-content/uploads/2018/10/logo.png wootc2012-05-24 18:59:532018-12-16 11:17:34Take Your ESD Testing to the Next Level With 10 Tips
Link to: Get in touch